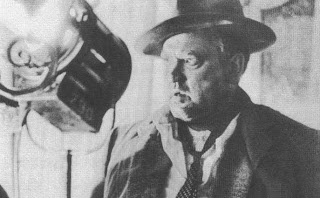 Hank Quinlan is a border town cop bloated by secrets swallowed.  Mike Vargas is a Mexican drug enforcement officer riding his career on the momentum of his perceived integrity.  A jazzily meandering tracking shot brings them together in the firelight of an official’s exploded car, and together they play out the universal allegory of good versus evil.

Welles lowers his story into the pulpy darkness of hypocrisy, murder, sex, drugs, desperation, and revenge, and never brings it back up for air.  It is a claustrophobic world, stinking with death, where the liveliest moments come from a pianola played by no one, where a smug, lurid chuckle barely masks the condescension of institutionalized corruption, where “intuition” is as good as justification, and where even the man for whom all the busy police work is set to avenge (the city elder expended in the opening scene) is himself a brazen philanderer estranged from his family.  But Welles does it all with his indelible style, upgrading a B-movie, as he even called it, into that which cannot be ignored for its visual power and its ever-resonating thematic punch. 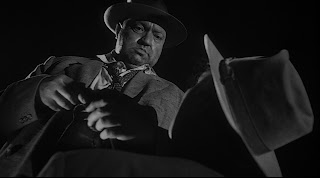 The melodrama is as corpulent and sweaty as Quinlan, so thoroughly shot through with dread and dirt, it renders even more disturbing the already blunt dialogue: “An hour ago [he] had this town in his pocket… Now you can strain him through a sieve;” “We don’t like it when innocent people are blown to jelly in our town.”  And running underneath, seething racism, all of it subtle.  Vargas’s newlywed wife, embarking toward an American motel while Vargas diverts back into Mexico to investigate the explosion: “I’m just going to an American motel for comfort… not for safety.”  Quinlan to Vargas: “You people are touchy.”  And Vargas’s own reverse racism, contained quietly in his observation that the idea of peace, in the form of a 1,400 mile border without a single machine gun in place, is “corny” to his American bride, as if American hubris is uncomfortable with the idea of going warless for so long. 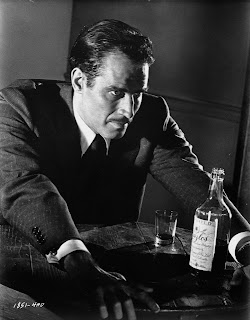 But the film is also stilted up by the themes of duty and idealism.  Quinlan, as few scruples as Falstaff, but none of the fun, orders his world of planted evidence upon a simple and good philosophy: “When a murderer’s loose, I’m supposed to catch him.”  And this reasoned exchange with his partner:

MENZIES: You’re a killer.
QUINLAN: I’m a cop…  I don’t call [my job] dirty, look at the record.  All those convictions.
MENZIES: Convictions, sure.  How many did you frame?
QUINLAN: Nobody… nobody that wasn’t guilty.
MENZIES: …Faking evidence –
QUINLAN: Aiding justice, partner.

Evil there, but with good in the balance: the borderline self-righteousness of Vargas.  The slow show of Quinlan’s dark deeds often stirs Vargas into sanctimonious diatribes.  To Quinlan: “In any free country a policeman is supposed to enforce the law, and the law protects the guilty as well as the innocent…  A policeman’s job is only easy in a police state.  That’s the whole point, Captain.  Who’s the boss, the cop or the law?”  And to Quinlan’s partner, laying it on thick: “What about all the people [Quinlan] put in the death house.  Save your tears for them.”  In fact, the greatest fault of the film is that it allows Vargas, the mouthpiece for glib, nickel-plated platitudes, to finally elude the moral griminess of the real world.  Though he is touched by evil (or rather, it is his wife who is groped by evil, and he is only threatened by the possibility of being forever associated with evil), he is never fully in its grasp, never made to suffer the crush of evil, the kind of evil that creates the Quinlans of the world.  He even makes his exit before Quinlan’s death plunge, falling into his wife’s exonerated arms, speeding away into marital bliss, so that he doesn’t have to personally bear witness to the final, bloody result of his revenge. 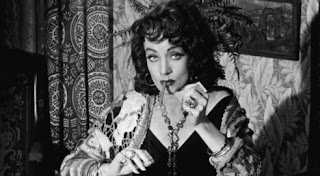 Rising above the grime, and giving the movie its ultimate grace, is the fun it has with being a movie, how Welles never lets us forget that he is loving telling this story:  The first image of the movie, fingers twisting a timer on a homemade bomb, feels akin to someone winding up a toy and watching it go.  Quinlan’s pitiful entrance, attempting to pull himself out of his police vehicle with all his tremendous girth holding him back, is a wonderful counter to Harry Lime’s magnetic, stylized hero’s entrance in The Third Man less than a decade before.  Marlene Dietrich’s small role – and enchanting eyes – provide the perhaps unwanted evidence of Quinlan’s former love life… and a great excuse to use chili as a euphemism for sex.  Uncle Joe Grandi, the comic embodiment of inept local power by birth, manifested as a self-important devil on Quinlan’s shoulder, allows for a scene illustrating Quinlan’s heavy, sweating denial of his own capacity for “making deals,” though that is exactly what he’s doing.  The five-and-a-half minute, one-shot scene in the heart of the movie (inside Sanchez’s one-room apartment) that tracks the emotional movement of characters as beautifully as the opening shot tracks physical movement.  The visceral swamp of images in the Grandi death scene.  And, despite Pauline Kael’s rebuke, the final Quinlan epitaph, remarked by Dietrich at the close of the film: “What does it matter what you say about people” - a negation of one of filmmaking's primary functions, even as the final images plant an urge to want to twist the timer on the clock once more. 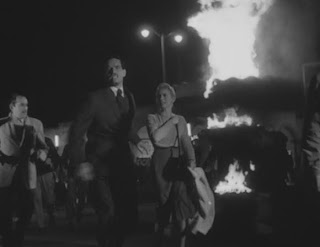 There is no escaping the resonance of the film in a post-Iraq world.  A story of a dirty cop planting evidence in an assumed guilty party’s home and behaving with the cavalier assumption that the act is justified based on intuition of guilt is one that seems tailored to rouse an audience trying to live beyond the Administration that authored that war. An interesting, if easily unrecognized thing happens when viewing Touch of Evil today.  The somewhat tacked-on resolution of the Sanchez story (he who blew up the car but maintained his innocence throughout the film) is said to have finally confessed his guilt to Quinlan’s men.  This is presumably meant to layer the end with irony, that all of Quinlan’s hunches were correct, and that planting the evidence (and indeed his very death) was unnecessary.  But in a media environment saturated with debate on the legality and dependability of “enhanced interrogation techniques,” a modern audience is left with an even murkier ending, one that calls to question if the confession drawn out of Sanchez under duress can be trusted to be true, or if he just said what was needed to be said to abate the fists.  It is wonderfully, terribly fascinating to consider that, even as often as art influences society, it is also true that society can forever alter the meaning of art.  And in this case, the mystery of meaning can make Touch of Evil, to use Welles’s own words, “just exactly a thousand percent more effective.”