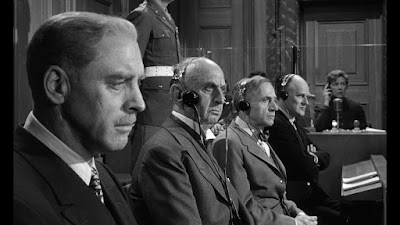 One of several crowning jewels in Stanley Kramer’s headier-than-thou resume, a brow-furrowed, three-hour adjudication of Nazi war criminals that’s given thankful respite from its melancholy by the periodic display of Marlene Dietrich’s cheekbones. We move through the opening formalities of establishing Spencer Tracy’s tribunal judge character as an everyman (“a hick like me”), a man of principle!, but who we’re told, in several not-so-subtle strokes, should only be understood as the exact opposite of someone who’d fanatically obey the rules like those in the dock. Thus our avuncular and inquisitive conscience-of-the-film is thrust into a case nobody wanted – presiding over the judging of judges who may or may not share partial responsibility for sending Jews to their death in concentration camps during WW2 – and we settle into the rhythm of the movie: a sort of American Idol-like rotation of great actors doing great turns on the stand. These sobering testimonies build upon each other, assisted by several cinematically forward-looking snap-zooms, generating nothing so clear as an easy reckoning of their individual guilt, but at least creating intensely watchable drama, culminating unsettlingly in the prosecution’s courtroom projection of sickening, damning film footage of spent and bulldozed victims at the liberated/death-shrouded camps.

During the final hour, we drift from the abstract question of whether these men were acting in the country’s best, long-viewed interests by cowing to Hitler today, and into the more immediate question of whether Tracy will sentence these men as harshly as we know he wants to now that Germany (and Germany’s good will vis-à-vis America) is needed to help fight the Russkies in the suddenly looming Cold War tomorrow. It’s a shift in focus that makes the movie relevant for all time, as leaders are constantly balance-beaming the cry for social justice and the need for international détente.

As for the parade of fine actors, (Oscar-nominated) Judy Garland plays a woman who is suffering through an invasive re-trial of sorts for supposedly being intimate with an older Jewish man, a bold violation of the fascistic Nuremberg Laws established by Hitler in the 30s. But while her performance is imbued with her always believable, wounded-bird tremble, her arrival to the story falls soon enough after a truly heartbreaking scene by (also Oscar-nominated) Montgomery Clift – whose mentally fractured, sexually emasculated character must testify to his own unfair chemical castration at the hands of unscrupulous doctors – and is so tightly flanked on all sides by rarely-better (also Oscar-nominated) Burt Lancaster and (Oscar-winning) Maximilian Schell, all spouting Abby Mann’s Oscar-winning script, that to my first-viewing eyes, her bona-fides are effectively swamped out. I guess we can blame the Academy for making the movie a rank acting contest, so forgive me if I say that Judy’s three-scene arc is good, but Monty’s lone, ten-minute compendium of squirmy, cornered helplessness made me cry.
Posted by Robert at 9:58 PM No comments: 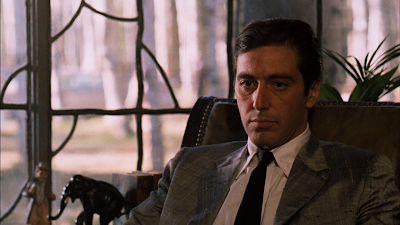 You’d like to say Michael Corleone has his father’s eyes, only you can’t really see his father’s eyes. Gordon Willis made sure of that. But in this sequel-that’s-also-a-prequel you can see everyone’s eyes just fine, and maybe that’s the most basic reason why the movie doesn’t seem as grandly totemic to me as the original. Michael is precise, feline, then explosive in spots – we see the machinations, the Michaelvellian moves, if you please, and we see it all in his eyes, the windows to his ambition. But a fully-lit face means there’s not the same sense of unknowable, melancholic danger in his presence as there is in Brando’s. In the original, it’s the weight of that titanic, yet somehow receding performance that keeps everything hairpin tense, even when he’s his own mumbling version of docile and accommodating, or even when he’s nowhere near the scene. What Michael can do is a sort of second-generation gravitas in that Pacino way, show ‘em the whole iris over that ever-infuriated mouth, supremacy channeled through the ends of his cigarette-clenched fingers – but pop had all that in a stroke of his cheek. So that purr of quiet menace at the heart of the tale is missing.

Part II makes up for it partially with showier political complications (Senate hearings and such), though doing so sacrifices more than a few layers of the hermetically sealed world of the first part, where external players (Hollywood producers, police chiefs) seem more like flies buzzing around Brando’s head. There’s a less-cramped tone overall in II that, despite the sometimes pitch-dark cinematography, makes the whole movie seem more sun-lit.

Another minus for me is in the prequel segments: we get to watch DeNiro becoming Vito, but we don’t get to see DeNiro be Vito. While we see how his eye for justice meets a sociopathic business sense, killing the former neighborhood don cause it’s the right thing to do, and how his streetwise charm fills out that power vacuum, and while we know that young Vito’s lean and wily charisma will eventually be absorbed into old Vito’s slow-motion, glad-handing brand of power, we never actually see that crucial calcification on film, that essential moment when DeNiro recedes into the darkness behind the desk… forgive me, maybe even padded, LaMotta-like, silently waving in his next client. Coppola went for subtle instead, but plug me in the forehead with a .38 special, I wanted to see that moment.

All that said, I’m not about to discount this movie. When its only possible comparison is one of the greatest movies ever made, it’s impossible not to find something lacking. In fact, though, Part II is done with such aggressive love and precision that anything happening inside of it, melodramatic or mundane – the setting of a pear on a table, two men talking about a rug over coffee, a group of mobsters eating cake – is exquisitely engrossing. I found myself, most of the time, forgetting that I had to write anything at all about it, and just got lost in the yellow-tinted tragedy of it all.

Posted by Robert at 9:35 PM No comments: