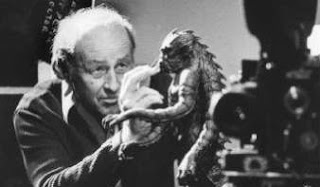 Ray Harryhausen was my first hero. He goes as far back in my memory as no one besides family and, perhaps, Charles Schulz – my other childhood hero. Every birthday when I was a kid, I had a secret wish that my parents would arrange for Harryhausen to make a surprise visit. My mind would have been blown! Full disclosure: that wish never went away. He’s so deep inside my creative DNA. It may sound silly to most, who only see dumb, herky-jerky monsters with questionable rear-screen projection. For me, he connected me to my imagination in a way like NOBODY ELSE DID, and his art requires zero apology. I could watch certain scenes and entire movies all day today, and might just do that. Some favorites are the Allosaurus attack in “One Million Years B.C.”, the New York rampage of “The Beast from 20,000 Fathoms”, the Cyclops doing anything at all in “The 7th Voyage of Sinbad”, and the Talos sequence from “Jason and the Argonauts.” Each one a beautiful marriage of fantasy, adventure, dreamscape, and utter technical mastery.

Harryhausen killed MANY creatures on screen, even seemed to take a morbid joy in giving us the thrill of the kill shot – but more importantly, he NEVER let us get away from the scene before making us feel sorry for the loss. We were always forced to watch the creature take its last breath. That moment is in virtually all of his movies, from the Rhedosaurus succumbing in “The Beast from 20,000 Fathoms” to Medusa’s decapitation in “Clash of the Titans.” Our excitement at seeing the monster (in whatever form it took) get taken down is, in the hands of such a humane storyteller, replaced by pathos and a real feeling of guilt as we watch the last ebbs of life push their way out, and we are made complicit in the destruction of a living thing. In a strange way, through his hand-crafted, slow-motion art, Harryhausen taught me compassion. 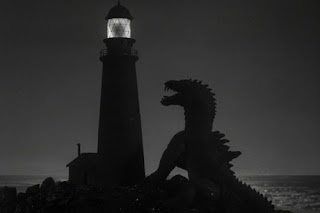 I finally got to see Harryhausen in person, during one of his many sold-out presentations around Los Angeles. This was probably around 2000 or 2001. He was showing off a few of his models at the Academy of Television Arts & Sciences in North Hollywood – a mere five blocks from my apartment at the time. I carried with me the first book I ever bought with my own money, when I was seven, a book called “From the Land Beyond Beyond”, an in-depth, film-by-film discussion of all of his movies up to “Sinbad and the Eye of the Tiger” – and a book that was by then so lovingly handled for so long, it was in four tattered pieces. After the presentation, I was determined to get him to sign that book. But when I saw this gentle, sweet old man engulfed by a swarm of fans, I thought to myself, “It’s enough that this book, Ray Harryhausen, and I are all in the same room together.” I’ll cherish that memory for as long as I live.
Posted by Robert at 10:13 PM No comments: