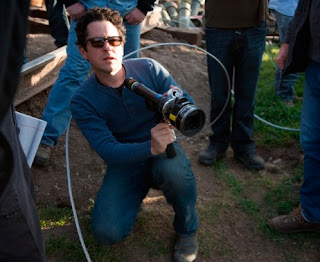 In Woody Allen's little, warm fairy tale of a movie, Midnight In Paris, Owen Wilson takes a trip back through time to visit his literary heroes, who give him notes on how to write his book.  For the blockbuster crowd, released only weeks later, there's also a big budget version.  It's called Super 8, in which J.J. Abrams takes a trip back through time to visit young Steven Spielberg, who gives him notes on how to make his movie.  Both films wallow in nostalgia for those things that influenced them.  Both films also rely on thin character signifiers to bridge us from the sources we know so well to their use in the new context.  Both take the surfaces of former icons (literary personalities and film images, respectively), reconstitute them for a new purpose, and shuffle them together into a new entertainment.  So if both films egregiously bastardize their sources, then mold their plots around cheapened and truncated versions of their former meanings, why is it that I finished Woody Allen's movie light and happy but I finished J.J. Abrams' movie angry unto silence?

Good question, so I did a little bit of soul searching.  And finally a little bit of admitting to myself that I'm simply not as knowledgeable of the warp and woof of Hemingway, Fitzgerald, and Stein as I am of the vast catalogue of unforgettable images supplied to my young imagination by Spielberg; so I had less room to be mad at Woody.  But deeper than that, it's clear watching Midnight In Paris that Allen has no desire to unpack the dark side of any of his heroes; it wouldn't serve his greater point to take those personalities more seriously.*  They are there to coax out a self-described "minor insight" in the context of a deliberately whimsical, airy fable.  But when Abrams re-uses Spielberg's icons, he has every intention to bring us to an emotional point similar to the original icon's power.  No, when I see in Super 8 the first shots that are clearly taken directly from the Spielberg songbook -- the bits in friend Charles's bustling kitchen, taken in overlapping activity and tone from the home life in Close Encounters -- I'm not shaken to anger.  I knew from the trailer that this was (as all the advertising was pleased to inform me) as much a Spielberg movie as an Abrams movie.  But by the end, the homages had stacked high, and the weight began to physically hurt.  A few of the many tributes --
These plus many others meant, on average, a blatant visual rip-off per every ten minutes or so, a barrage that constitutes a kind of affront to anyone who grew up loving those movies, so arbitrarily were they fitted into the plot.  A shot or sequence you recognize and remember loving from a favorite movie, now tossed into a greatest hits salad such as this can only make you recall how much you liked the original movie better.

But this list could have been absent entirely, and the effect of the final sequence would have still done the trick -- the Joe/Cop-Dad reunion hug in the final sequence, lit and framed to mirror E.T., complete with cutaway to the blonde female in his life (the girl here, the mom in E.T.), followed quickly by a finale that's a near shot-for-shot lift of ship taking off, friends looking up in awe, and dark-haired, wind-whipped, ambiguously resolved, young protagonist staring earnestly at the closing credits coming his way.  The rest of the list could, in comparison to this ultimate example, still be construed as individual moments of innocuous "sampling" inserted at moments of less than key import to the plot.  But to make the end of your movie virtually indistinguishable from its inspirational source, while also expecting the moment to rise to the same emotional pitch as that source, is to ask us to cry bittersweet tears over what, by the overt, shameless manner of its replication, has been rendered a virtual spoof of the moment.

Indeed, the affect of co-opting a movie moment as high-profile as the end of E.T., especially in the service of a movie that is uneven in so many other ways**, reminds me more than a bit of the affect of the attempted humor in deliberate movie spoofs like Scary Movie and Epic Movie, whose visual references have no life of their own outside of their basic ability to make the viewer recall their scenes' original use.  Abrams' movie is clearly much better than that brand of film, but the construction and intent are unsettlingly similar: follow a collection of undeveloped characters across a typical genre plot (in this case, the Spielberg genre), and hang obvious odes onto the construct along the way (in this case, father-son concerns, alien visitation, Hawksian masculinity/romance), each intended to wheedle an enjoyable shock of recognition and, Abrams seems to hope, borrowed depth. 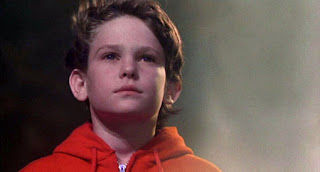 Maybe outrage like mine is overblown.  It's crossed my mind.  It's just a movie.  It's just an homage.  And the movies he's riffing on are far from perfect themselves.  And the filmmaker he's riffing on made his career by quoting the great filmmakers that came before him, most notably David Lean, John Sturges, Howard Hawks, and John Ford.  I'm willing to concede that I've wasted an afternoon breaking down the obvious.  In any case, it will take me awhile before I can watch the end of E.T. (a movie I still very much enjoy) without feeling a jolt of lip-curling disgust over Super 8.  Just thinking out loud here, but an antecedent to this movie could be the Howard Hawks-produced movie The Thing from Another World (1951), the highly regarded science fiction film directed by Hawks's editor Christian Nyby; but for all practical purposes, visually, thematically, and character-wise, actually directed by Hawks.  As producer, Spielberg was surely involved in the creation of this movie as deeply as anecdotal evidence indicates Hawks was involved in The Thing.  So, at least for me, it begs the question, if Spielberg was the one suggesting these ransacked moments, or even if he wasn't, why would he allow them to be used in such a way as to diminish the originals' impact?  The answer can only be that he either has lost touch with his own emotional ownership of that iconography by virtue of time passed, or, in a manner that horrifyingly mirrors his buddy G. Lucas, he just doesn't care.