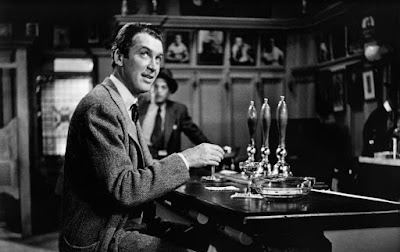 Harvey’s built up quite a head of comic steam in my mind over the years that I’ve put off actually watching it. But I could only really get into it about half way through, when I accepted that it isn’t exactly the comedy everyone told me it was. While plotted like a comedy and populated with comic characters, there’s simply something else going on that isn’t really all that funny, possibly creepy, a darkness unintended. Maybe I can blame all those Hitchcock and Mann movies Stewart painted himself black with during the decade after Harvey for retro-informing my take on his character. Or maybe I can blame the last sixty-plus years of culture moving away from embracing the tipsy, Thin Man-esque consta-drunk. Or maybe I can blame Stewart himself for not really playing a drunk at all, but his usual confident, clear-eyed self, only this time cavorting with, you know, an invisible, six-foot rabbit – a bizarre incongruence that, for this first time viewer, sparks an unexpected creepiness. With his head seemingly as level as ever, watching Stewart watching other people’s reactions to him as he introduces them to his big imaginary friend, his typical smiling geniality mixed with some unnamable expectation, is like watching a darkly cruel psychologist probing a man on the street for his reaction to a friendly slap in the face. I can hear Stewart’s laconic drawl now, accompanied by his preternaturally charming, leaned-forward twinkle: “Now, tell me, w-what’ja think of that?”

I admit I’ve broken that rule-number-one of criticism: analyze in the context of the film’s time. Too late, Stewart’s cumulative screen persona is too strong. I just can’t believe that the same man who traced the anatomy of a murder, if you will, or carefully wheedled his way into vertiginous love with a fake blonde, or accomplished so much over so many movies with his probing humor, can be so far behind the other characters that they’re the ones tip-toeing around his dementia. This may be the only movie of his that asks that of me. I can only respond like I do in every other one of his movies: trust he’s doing the right thing for the right reason…or that he’s going to learn that his way was the wrong way the whole time.

Or maybe it’s more like this. Most Jimmy Stewart movies are some kind of balance between the two stammering halves of the brand JIMMY STEWART: the yearning, sweet-souled, righteous bumpkin who’s everybody’s earnest best friend, and the taciturn missionary – world-weary – trying to hang onto a shred of moral decency while screeching at Injustice with that patented righteous drawl and/or pounce-ready anger-panic – face like a big white knuckle. I believe we respond to the first because it’s who we want ourselves (or our nation) to be, and we respond to the second because we know how he feels and we wish we could airlift him out of the movie before he breaks into too many pieces. He’s both in most movies to some degree, often traveling the gamut from one to the other (as in Mr. Smith Goes To Washington) – and it’s the combo that makes him three-dimensional, time-proof. But in Harvey, he’s all-likable-all-the-time, without a single dark quiver from behind the rosy glasses (a tremendous testament to his high-wire skill), and it finally got to me – I decided the darker Stewart had to be there, he was just keeping it so deep beneath his vest...that only I could see it. He must be putting everyone on – cause Jimmy Stewart’s too smart to be so delusional!

I guess my boiled-down bottom line is this: what I got from Harvey isn’t “Sweet, lovable Elwood P. Dowd doesn’t realize the trail of confusion his steadfast loyalty to an invisible rabbit is creating behind him, and isn’t that funny!” but instead “Either Elwood P. Dowd is a mischievous prankster lording it silently over all the suckers, or he’s exactly who he presents himself to be, in which case he’s happily chained to his very own Babadook, and isn’t that horrifying.”
Posted by Robert at 9:20 AM No comments: