The brilliance of Christopher Nolan’s movie is that it so successfully dresses up its ninth grade premise with spit and shine, you finish up feeling actually entertained.  The basic mind-invasion conceit is one that sounds at its root like it was cooked up in the back row of computer science class by a bright 15 year old, and it's so proudly offered on a silver platter of fine, earnest imagery and energy, you can't help but admire its precocious verve. But the movie takes a cue from its own idea-planting premise and knocks you unconscious with its relentless, always-at-the-climax music and absorbingly-shuffled time-space just long enough to make you think a nice little Möbius bow has been tied around your mind while you were out, even though it hasn't.  By the time you come to, sometime toward the end of the closing credits, the movie's as vacant as your now-emptied popcorn bowl.

The film is blocky, heavy, emotionally inert even in its most emotional moments, visually homogenous - AKA boring (though the van takes the Nestea plunge in an agreeably Peckinpah-ish way, it still only acts as a series of cool but gimmicky stakes along the faux opaque journey), and its music pummels you into exhausted submission. You're constantly rattled and you think this Rube Goldberg spectacle will surely fall over at any moment - but to its credit, it never quite does. Like the beer-gutted raconteur on a spindly barstool, it spouts its braggadocio across the head of its tenth Budweiser, but never passes out. Then, the film is not so much full of ideas as full of rules for one idea (see Chesterton). And each newly-coined rule justifies itself in the very next scene, giving the repeated feeling of a man laying concrete to take his next step. It's hard to tell if Nolan is the genuine wunderkind whose idea is gilded with enough fresh surprises to keep us beguiled (and it does, to a point), or if he’s the old cynic who just wants to test how long he can keep us distracted by shiny, spinning objects. 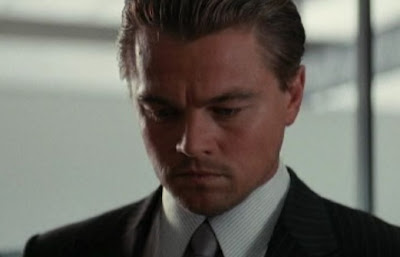 If the legitimacy of the movie were to be found in the furrowed, ever-earnest brow crease of Leonardo DiCaprio, then it is legitimate in spades.  His forehead, the score, the editing, all work in overdrive to make you take it all seriously.  I kept wishing for something a little more leavened with - though it's a stretch for this filmmaker - a Tati-like amusement with the fact of the multiple, explorable strata of mind-time - or maybe just a hint of self-awareness that its overblown seriousness renders it a kind of sci-fi Sirk, if only it could trade even a few of its bombastic moments of import for a beat or two of actual, non-portentous fun.  But the exuding slick, silver-black ambiance matches the paneling inside Nolan's desperate need to be received as an important filmmaker, an open-faced plea that was like a metal rod down the back of his entire Batman series, with their veneer of political importance and social relevance that near-audibly screams "tag me meaningful!"  My only sin, and this movie rebukes me over and over for it, is that I didn’t love it as much as Christopher Nolan did.

Outside of the other obvious filmic antecedents like Eternal Sunshine and The Matrix, I keep thinking of the great little time travel movie Primer, another story that asks you to accept the truly impossible after only giving you the simplest of tools to make that impossibility happen  (also just a box, for goodness sake). But whereas Primer cast the audience as eavesdroppers on the kinetic mind-play of a specific kind of science, with its exposition wrapped in dense but off-handedly spoken jargon leading to a premise you believe because you trust that the characters, down to the man, know what they’re talking about, in Nolan's movie you have rules thuddingly catechismed in by necessity of what has to happen/can't happen next in the plot.  The continual dogpile of rules for the idea to work makes it ultimately cumbersome, like when kids gather in the street for a game and make up their own rules as they go along.  You never begrudge them their fun, and it’s sweet to watch such elemental creativity on display in ones so young, but eventually you want to stop watching and go back inside to finish Shutter Island.
Posted by Robert at 2:47 PM