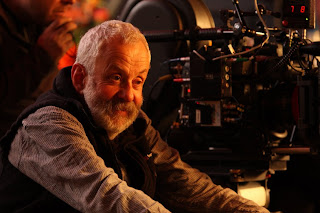 Mike Leigh’s film is nominally a reflection on the ways in which we cultivate the relationships around us, but more so it’s a dissection of the prickly dynamic between the emotionally strong and weak.  Fortunately the film overcomes the prosaic symbolism of a garden, managed over the span of a year, by burrowing into the disparity between those who wish to give others help and those who clearly cannot be helped until they first help themselves.  It’s a set up of character conflict that promises drama, but Leigh doesn’t seem as interested in anything as fabricated as drama, in the sense of any “movie” drama we’re trained to expect.  Instead, the four pieces of his story – each corresponding to a season of the year – demonstrate the filmmaker’s gift for recording simple life moments, some triumphant, some humiliating, all of it true and awkward and real. 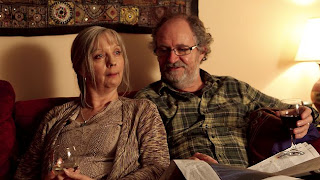 The movie asks us inside with the ease and hospitality of its two central characters, content, aging couple Tom and Gerri – yes, they acknowledge how funny their names are.  In fact, the casual way they wave off a guest’s comment on their names – names we know could have been anything the writer chose them to be – is only one example of the lengths Leigh will go to establish a credible atmosphere and tone.  Tom (Jim Broadbent) is an industrial geologist who “digs holes” and Gerri (Ruth Sheen) is a psychiatric counselor who helps people out of theirs.  But mostly they’re the quietly blissful, unassuming curators of a growing menagerie of stray people.  Most prominent is Mary (Lesley Manville), one of Gerri’s co-workers at the clinic, a mid-50’s woman of such all-engulfing neediness that the steady revelation of her myriad failures – with love, with money, with everything – becomes, in time, a black joke, especially in constant contrast with the piston-true calibration of her emotional benefactors.

While Tom and Gerri’s patience and care frame the story, it’s Mary’s emotional unraveling that drives it.  Mary spins in a predictable cycle of denial and despair, but the shock of how short the frequency is from one to the other spikes her performance with just the right amount of manic urgency.  Because the despair follows so hard upon the denial, we’re never fully convinced that either is self-inflicted.  Her romantic desperation, manifested in a bureau’s worth of age-inappropriate attire, is aligned with anyone in the audience who’s ever feared the loss of their youth or the dimming of their allure.  She is guilty only insofar as any of us are guilty of holding on too long to the idea of our own singularity in a world of pretenders.  Manville gives a hair-flipping girlishness to the character, enough that she is blithely separated from any responsibility for what comes to crush her, but Leigh’s intimate camera is in such constant communion with the lines in her face that we can never fully forgive her the innocent act.  It’s a delicate formula, and Manville’s talent keeps it uncomfortably true – that is, tragic. 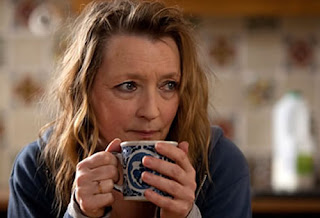 Leigh’s fascination with Mary’s dive-bombing psyche keeps it turning in all directions.  Even as she sadly pines, in terribly mis-guided fashion, for Tom and Gerri’s thirty-year-old, single son, Joe (Oliver Maltman), she rebuffs the earnest, albeit drunken, advances of Tom’s equally desperate friend, Ken (Peter Wight) – for being unattractive, giving Mary’s sexual attraction to Joe, the son, an even deeper shade of Pitiful.  Of course, Joe all but leads Mary on in her gambit for his attention by playing along with her double entendres and letting her continue to compliment his physique and good looks.  We can infer that his odd deference to her flirting, surely not actual reciprocation, is a learned response from watching his parents, who he’s seen give Mary a wine vat’s worth of behavioral latitude since he was ten years old.  If his attitude toward her, though, is deferential, it metastasizes into thick condescension only after he finds an age-correct girlfriend, Katie (Karina Fernandez).  It’s as if through the prism of something “real”, he can more clearly see Mary for the boozy cougar she is, and the sad lout his parents always knew she was.

It’s in these moments of truth for Joe that we also begin to see Tom and Gerri in another light.  The quasi-enabling allowance given to her slow, confessional, profane drunkenness in an earlier scene, accompanied by a hug given by Mary (earnestly) to Gerri (awkwardly received), gives way toward the end of the movie to their subtle, head-cocked disappointment and condescension in the final scenes.  One is left to deduce – though it is subtle enough that it might simply be an impression, with none of Leigh’s intention to name it – Tom and Gerri might keep Mary around not to be her healing angels, but as part of their own need to be seen as the perfect model.  Like a perfectly kept garden is as much decoration as it is source of replenishment, this gaggle of scruffy need-niks might be all they need to keep their superiority intact. 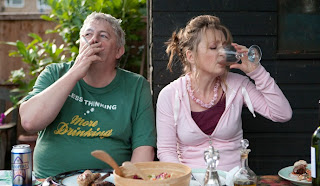 Leigh is not afraid to make the audience work – and this is refreshing.  We’re brought into many situations that linger for minutes before we’re enlightened to key information.  In the “winter” segment, Tom brings Gerri and Joe to his rustic hometown for his sister-in-law’s funeral.  They find his brother Ronnie (David Bradley) in a state of walking catatonia, barely grunting between drags on his cigarette and beer.  But was he this way before the death, or is this his response to it?  It’s up to us to decide.  Left to wonder, it seems clear that he became this way over years spent with an unpleasant woman.  Ronnie stands recoiled, gaunt, and near-mute, as a foil for the hyper-conversational Mary, so that, if this were a typical movie, it would be as inevitable they’d be together as it was inevitable she’d be with Ken, for all the par-for-the-course misery she and Ken would no doubt bring each other.  But nothing plays out as we expect.  From the beginning of the film, we’re introduced to people who sometimes come out of nowhere with their sorrows fully formed, and who we never see again, with no resolution.  The movie pretends for its first ten minutes to be about Janet (Imelda Staunton), a darkly depressed patient of Gerri’s who just wants a good night’s sleep to blot out the horrors of her home life.  Then, just as soon as she is wholly rendered and our hopes are fully pinned to her recovery, she’s gone forever.  After half an hour, the audience gives her up.  But Leigh’s lesson has been learned: just like life, don’t expect resolution here. 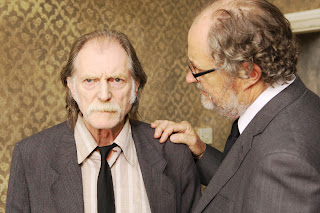 This is a movie that has the power to refute a year’s worth of explosions, bombast, gunplay, melodrama, psychic breakdown, pat history, and filmmaking gimmicks with a final encapsulating moment of irreducible melancholia.  Like earlier moments, wherein Mary (and us) are left to feel like we’re on the outside of an inside joke, Leigh has, in this ultimate moment, created an empty sigh of pure loneliness.  In such purity, there is perfection, and it is Leigh’s adeptness with that last dread feeling that can leave the viewer feeling at once weighed down by his lesson on life and uplifted by the power of his art.
Posted by Robert at 2:08 PM