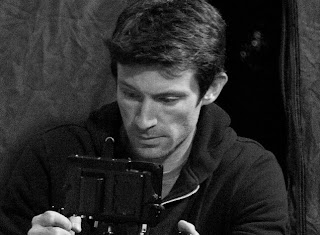 Whiffs of Malick.  Strains of Cronenberg.  Suggestions of Eternal Sunshine and Close Encounters and Wings of Desire.  The movie could almost be called a flip-book of film influences, if it weren’t that the pulse of the movie is the earnest, intelligent, ever-curious Shane Carruth, whose mathematic, probing scripts make everything he borrows his own.  But for a man as deliberate, level-headed and academically inclined as Carruth, Upstream Color is a strange miscalculation.

I approached the movie positively, my sails still full of hale regard for Carruth’s first feature, Primer, which had me muttering to a friend, “I would sell all I own and follow this man as a disciple.”  Primer pulls the audience in, despite the movie’s sheer indifference to whether we understand the jargon of its lead characters, by providing us with a nifty procedural that we somehow know is leading to something remarkable – and it does.  There are themes in Primer that are imbedded in the situation, and implications branching out from the multiple-timeline structure, especially in the last fifteen minutes, that we’re delighted to draw out in post-viewing roundtables.  The themes are not, however, the meat of virtually every visual we’re fed, as they are in Upstream Color, wherein Carruth trades the fun, head-scratching, conversational mystery of Primer for seemingly deliberate opaqueness – a glut of images that are all symbol, to be decoded, many with almost zero narrative weight.

It is impressionist cinema, to be fair, and not designed to be dependent on dialogue or straightforward plot, rather on images strung together leaning toward meaning.  It’s sometimes successful.  The first ten-minute sequence, in fact, is an engaging exercise in making meaning out of the mostly-unrelated images and characters, until, finally, you behold the somber head of the plot emerging from the swollen river of information.  It’s an exhilarating challenge, to gather up the stray facts running past you, and cobble them together on the fly – before the next one comes along – and construct in your own mind what would, in a usual movie, be offered up on a plastic spoon.  But by the final minutes, the sheer volume of unexplained and half-explained and unsatisfyingly-explained and should-never-have-been-explained elements had piled up, LOST-like, and I couldn’t help thinking the images were as much the product of busy work, and nearly as disposable, as the paper chains crafted by the drugged victims in the story.

Chief among the less satisfying aspects of the film is the manner in which the purely symbolic becomes the hard-grounded fact of our characters’ lives.  That the so-called “Sampler” – whose deific pastime seems to be hanging around the emotionally destroyed among us and gathering up their pain for the purpose of making music to sell in the CD section – is first presented as a Wings Of Desire style entity who can be among people but not seen, until later, together with his porcine menagerie of transplanted souls, they become flesh and blood, killable, lovable.  Whatever meaning I may have missed in the shift from one to the other (I probably missed a lot, as did you) could not have made up for the fact that an hour and half of moodily fractured emotional invention and surprise pays off in the final shot of a woman cuddling a pig.  Cut to credits off of that, and I don’t know any other way to feel but had. 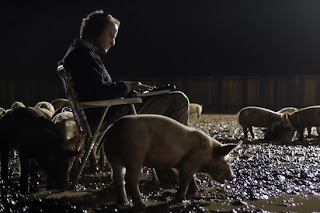 Upstream Color matches the off-the-cuff, loomingly-eerie and unabashedly egg-headed tone of Primer so closely that it effectively hammer-stakes his claim on the combination.  If the Mamet-light delivery of the dialogue, all truncated and revised trippingly in the moment, has you frustrated for its grating affectation, like it did me, then maybe embrace it, like I tried, as just a Carruth stamp – a tick of speech style that is as much his as Whit Stillman’s is his, or Wes Anderson’s is his.  If the salad shooter editing style, seemingly with little intent beyond the thrill of a fast-forward stumble through the ids of a desperate couple, has you wanting just a little bit more of a connection to these poor, broken souls, like it did me, then just sit back, because eventually, you can learn the visual language enough to fall into the rhythm of quasi-controlled mental-visual chaos and come out the other side, if not entertained, then at least with a general impression of having been through something meaningful.  And if you sense that everything I’m saying sounds like a back-handed compliment, then points for reading between the lines, because I am deeply and exactly disappointed by Upstream Color.