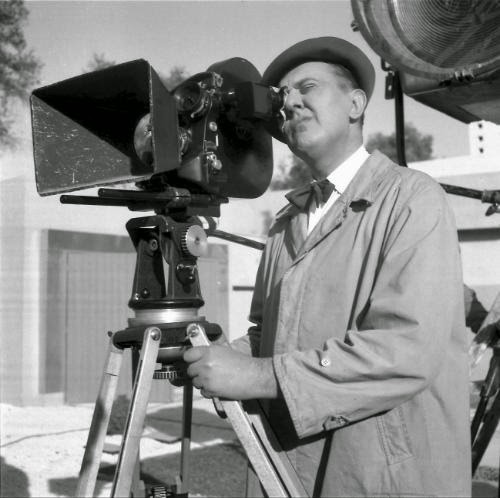 I keep thinking about the dogs in this film, how Jacques Tati the director makes them the stand-in for Mr. Hulot the character when he’s not around.  They are guileless, curious, carefree things, and they don’t always know the destruction they leave in their wake.  In the opening of Mon Oncle, we follow them from the old quarter to the suburbs, foreshadowing Hulot’s visit there in much the same way the wind blows through the door creating havoc just before he enters the hotel in Mr. Hulot’s Holiday (1953).  There is also a dog at the beginning of that movie, lazily blocking the road leading into the tiny vacation town.  We see Hulot’s hand reach out of his car to pet the dog long before we see his face.  We can’t help, in either film, but connect Hulot’s simple, innocent energy with the sweetness of animals that also depend so much on the kindness of strangers.  There’s a moment in Mon Oncle when Hulot, working for his sister’s husband, Mr. Arpel, at Arpel’s rubber hose factory, lays down flat on the floor to play with a dog that runs away before Arpel rounds the corner, making it seem like Hulot is just lounging there.  Hulot never knows Arpel sees this or that he’s making yet another sour assumption about Hulot’s laziness.  Likewise, when Arpel’s secretary sees footprints in her office that lead to the window overlooking her bathroom, prints that belong to Hulot via wholly innocent means, he never understands why she’s shooing him out so gruffly.  It’s not that Hulot is missing a brain, it’s simply that the world is judging him while he carries an almost determined lack of need to make any sort of impression whatsoever.  His sister says his head is in the clouds, but that’s not fair – his head is right here, observing always, absorbing everything, adjusting things for the better (see him move a window pane to move a ray of sunshine onto a singing bird), but forever finding himself in situations that are in baroque contrast to his easily pleased and happily accommodating disposition. 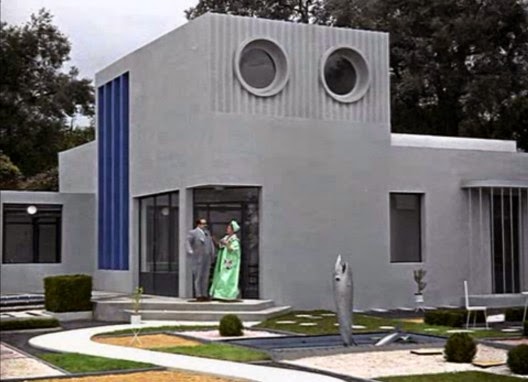 When we see the extreme contrast of Hulot’s unkempt neighborhood and the ultra-modern home of the Arpels, we know that Mon Oncle is a step forward from his previous movie’s simple scheme of sight gag set up and payoff and toward a particular brand of social commentary (though a long stride behind Playtime’s grandly poetic, intricately choreographed perimortem of urban living).  Hulot’s is a rustic, unchanged world of unwashed buildings, sidewalk cafés, open-air markets, street sweepers, and horse-drawn carts.  Inside Tati’s typically large, deep-focus frame, we see the bustling life of the lower class, stray conversations in the dusty street, haggling over prices – general life, presented as a bubbling ballet of activity.  While across town, in the suburbs, the Arpels proudly boast the newest in everything – home design, gadgets, garage doors, cars, clothes… and fish-shaped fountains.  We’re presented with these differences and left to deduce the bankrupt tedium of modern straight lines, imposed style, and the illusion that the newer way to do something (like boil an egg) is automatically better.  But these trappings of financial success aren’t presented in any malicious or dark way – the Hulot persona won’t let it get that far.  We may sense in Hulot’s bemused reaction to these objects and surroundings a kind of curious distrust of the fancy, and we might take away from his awkwardness that, just maybe, the closer we get to clean and streamlined, the further we get from experience itself.  But it’s never shown, as far as Hulot is concerned.  Where we actually get something closer to pronounced commentary is in the boredom of the Arpels’ young son, Gerard, who, surrounded by the exact opposite of a boy’s ideal playground in this near-empty, soulless home, exhibits a dry, quietly nursing cynicism that takes the form of repeatedly leaning his head onto his palm like a pint-sized Groucho.  Gerard is the nephew implied by the film’s title, and he is given over to Hulot’s care for part of the movie.  It’s only then that we see the boy come to life.  Hulot is essentially the same in all situations, but Gerard changes when released from the confines of his drearily bright and shiny home, making him the film’s truest, if quietest, conduit for the joys of the past, the warmth of nostalgia. 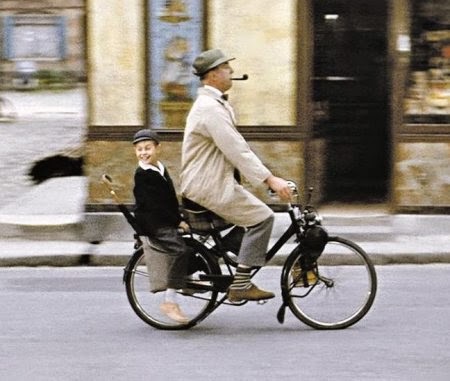 Hulot is socially fixed in amber, a maladroit throwback, never not halting, and it’s fun watching the Arpels spend time and social capital of their own trying to assimilate him into “normalcy” – Mr. Arpel by setting him up with a decent job at his factory and Mrs. Arpel by setting him up with the woman next door.  The blind date at the Arpels’ front yard dinner party is a major set piece that at once catalogues the many ways polite society can be a quiet sham and illustrates the impossibility of a man like Hulot ever fitting into that world.  He is the epitome of the misfit character: but he’s not possessed by an iconoclastic rage against the system, nor is this a scathing parody of modern life.  The film is neither a send-up nor a take-down.  It falls somewhere in between: Hulot is just a man so naturally unimpressed with the system that any time he’s standing up next to it, his isolated self-sufficiency is a pointed indictment against it.  Hulot could be the past before it ever knew it wanted to be the future. 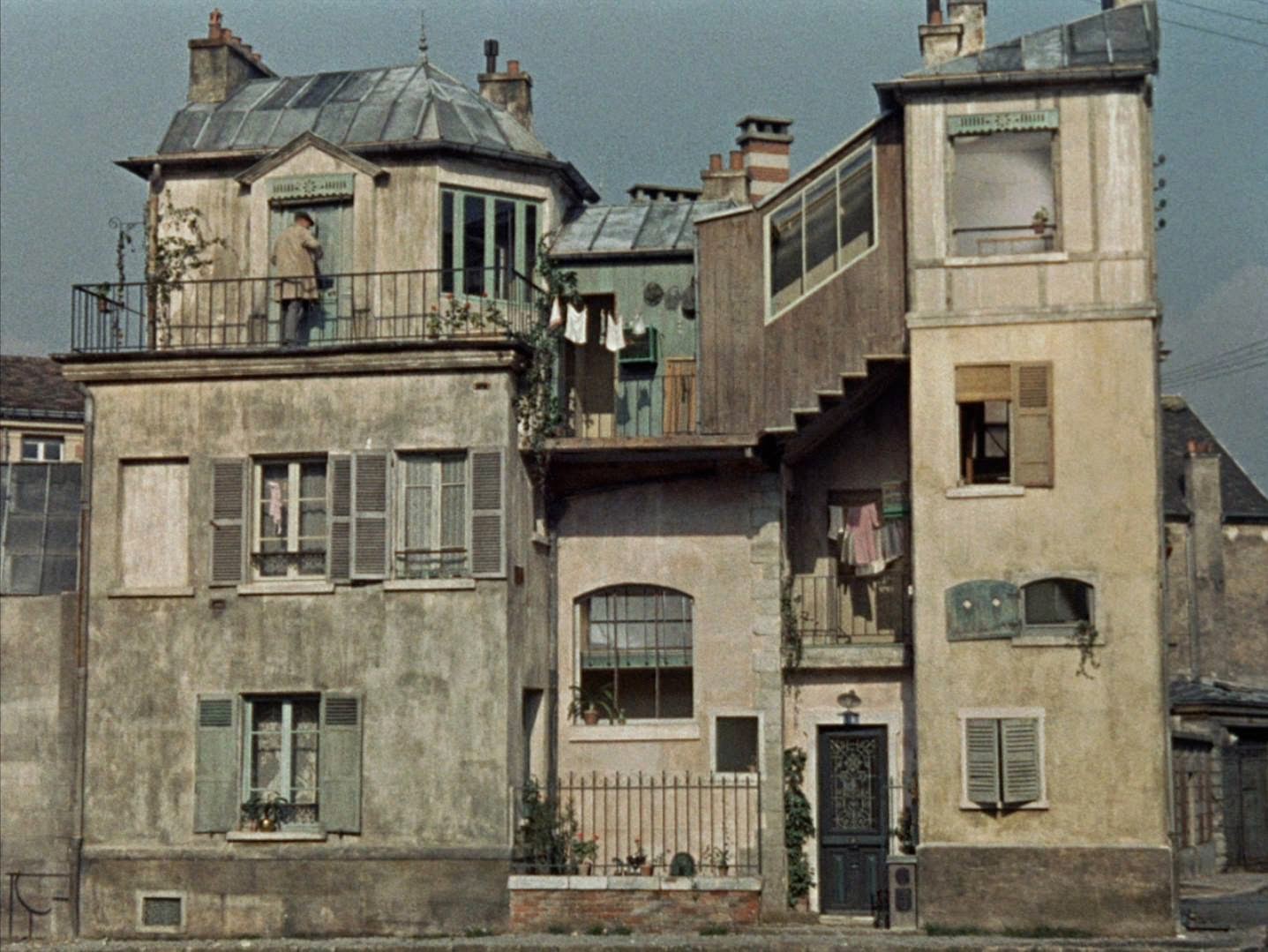 But, all of these internal themes aside, if you prefer, you can simply soak up the film’s many external joys, meted out via Tati’s brilliant mastery of composition and use of sound.  In one of my favorite shots, early in the movie, we see the entirety of the front of the three-story building where Hulot lives – a large, flat, diorama-type shot that could be the progenitor of a million Wes Anderson shots – and we watch through windows as he slowly makes his way from the ground floor, up several flights of stairs, across halls, through walkways, until he finally reaches his apartment on the top floor.  By the time we get to this shot, Tati has drawn us well into his way of seeing the world – Hulot’s physical movement, and the behavior of most of the characters in all his films, is an intentional pantomime that invites us to set it apart from reality, and yet his clear enjoyment in showing the character’s unfazed nonchalance at having to take this long course up to his home every day, more than once, infuses the moment with a buoyancy that carries over into the rest of the film.  We know instinctively that Hulot is not the kind who will judge others for choosing a fancier life.  Instead, we sense he carries his love for movement and life and interaction with the world into even those areas he can’t fathom are necessary.

If there’s a down side to Tati’s style, it’s that his films adhere so rigorously to this outside-looking-in approach, we’re left always the observer, never a participant, so a Hulot film does not generate pathos.  Hulot creates emotions in the characters around him – there are the annoyed hurrumphs of vacationers in Mr. Hulot’s Holiday and the head-shaking disapproval of the Arpels in Mon Oncle – but we, the audience, are at a distance and are not particularly moved beyond knowing chuckles (and sometimes outright laughter).  And yet, I would say Tati has constructed films that are perhaps the apotheosis of the observational film, because outside of the laughter created by watching a man so ill-fitted to the world around him, the greatest effect of watching a Tati movie is the way the submersion into his hyper-stylized point of view makes us, for a time, see our own reality differently.  After a two-hour stay inside one of his movies, you can look out the window, watch a workman park a little truck curbside and change a light in a lamppost… but you can’t do it without newly realizing the fluidity of his movement and the funny beauty inherent in the tableaux of a small human being interacting with his huge environment.  For me, this is Tati’s gift to the world, the gentle imposition of a view of life that is curious about it, aware of its potential to overwhelm, but enchanted by its never-ending poetry. 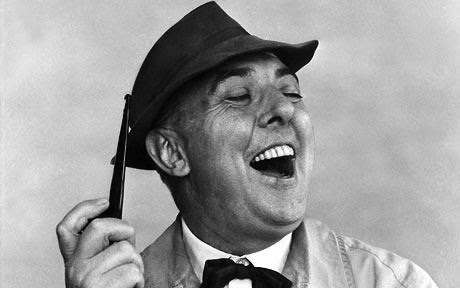