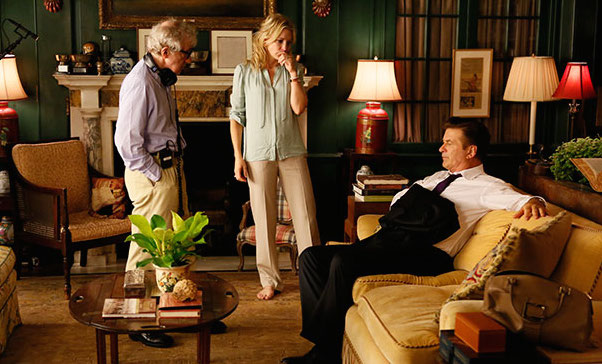 We love watching people crack up.  Stewart in Vertigo, Deneuve in Repulsion, Nicholson in The Shining, Portman in Black Swan.  There’s something perversely entertaining about seeing someone succumb to the level of frustration or fury or paranoia that results in a total mental disconnect.  But Woody Allen goes further in his new movie – or anyway, allows his lead actress, Cate Blanchett, to take his movie beyond what could have been just a simple entertainment.  His storied distance from actors whom he’s hired, typically avoiding any meaningful communication with them, gives them as much latitude as they can handle, and it’s mostly up to them to deliver the character.  Some fail to connect (often in a cringe-worthy way: Kenneth Branagh, Jason Biggs), while others grab hold, pull themselves up and make themselves indelible (Keaton, Caine, Weist, Davis).  But none do quite what Cate Blanchett does as Jasmine French in Blue Jasmine.  Blanchett takes what is essentially a standard comic premise – the city mouse and the country mouse, or the fish out of water; following a high society woman, sent low by a crooked husband, Hal (Alec Baldwin), and now cobbling together a new life in the sticks – and by the naked truth of her manically radiating despair bends the comedy into a tragedy.  This is the two halves of Melinda & Melinda rolled into one. 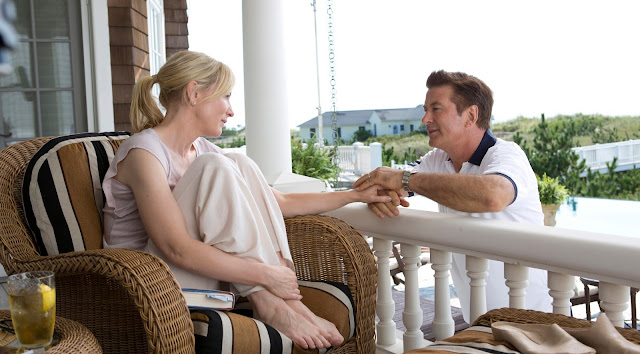 The basic riches to rags story is decorated with lightly comic moments that get wrenched into drama with the piercing gaze of Blanchett’s thousand-yard stare.  The script has her correct someone by saying that another character didn’t die from choking to death when he hung himself, he died of a snapped neck.  The darkness in the heart of the blankly delivered correction makes the audience chuckle, but the stare, the insistent, bleak fact of the death that’s written into her countenance, makes us stifle the smiles, refocus our attention, and acknowledge her pain.  Later, recounting her memory of taking a job in New York, post-downfall, and having to wait on her old socialite friends, the chutzpah of her belittling a “menial” retail job in front of her minimum wage sister, Ginger (Sally Hawkins), is funny – until she sits up, looks off and begins shouting bitterly to one of the friends, who is obviously not there (“I saw you, Erica!”), and we recoil at the undiluted psychosis. Again, later, Jasmine receives a phone call from a prospective new date, and it comes on the heels of a frantically funny search for her ringing cell phone.  She takes a deep breath, regains her poise, and we’re content to enjoy watching her desperate effort, until, after hanging up, she suddenly weeps with such a deep brokenness that we want to reach out and comfort her.  These shifts put the tone and intent of the movie on a see-saw.  It’s difficult to discern how Allen feels about her.  While the director busies himself with nurturing the comic wallpaper around her (why is Michael Stuhlbarg’s dentist character named Dr. Flicker, immediately evoking young Alvy’s “universe is expanding” scene from Annie Hall?), Blanchett’s fully-engaged, raging, bewildered performance draws our admiration even as we’re turned off by her character’s super selfish, condescending attitude.  It’s a mixed bag, but you don’t quite notice, or at least don’t mind at first, the strange friction of loose comedy and tight drama because you can’t look away from Blanchett writhing behind her red-rimmed, steel blue eyes.  It’s a diamond performance in a slapdash setting. 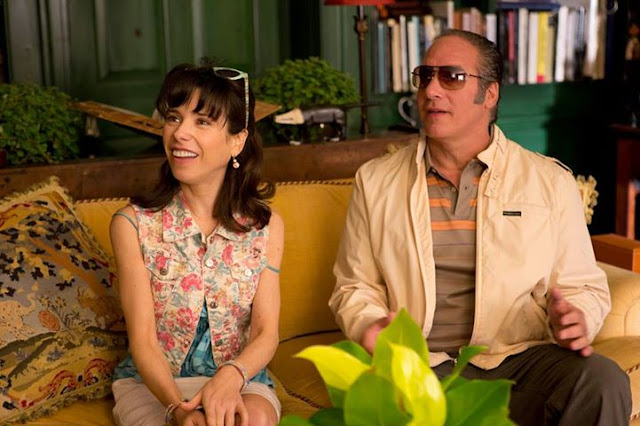 Both the comedy and drama are constructed atop class contrast: we only see how far Park Avenue Jasmine’s fallen by the boxing match playing on the TV of her new temporary home and we only know the humble conditions of her new bunkmates by the stoli martini she’s ordering another one of.  The way Allen makes us think about wealth by showing us how it looks against relative poverty is similar to, of all things, Small Time Crooks – which is getting slightly better with time – wherein the streetwise rabble turn their bank robbing front into an accidental springboard to untold wealth only to lose it again.  In both films, Allen’s noblesse oblige deigns that the poor get the last word on what has value in the grander scheme – in Small Time Crooks, Allen’s character rejects the loot he’s stumbled into in favor of the simple life of beer and cheeseburgers; in Blue Jasmine, sister Ginger’s brief grope toward upward mobility, by her standards, is dashed by a harsh reality that drives her back to her rough-necked but loyal boyfriend, Chili (Bobby Cannavale). There’s a constant reshuffling of our allegiances between the haves and the have nots.  When Jasmine orders another stoli as a spite to Chili (and most of the people in the audience), we root for the man as he throws insults at her – but later, as we watch her make a slow but earnest effort to get her footing in her new, un-gilded world, we find a real sympathy for her.  It’s as if Allen enjoys giving us a berth to judge both, but to ultimately come down on the side we’d least expect – the one that doesn’t have an apartment on New York’s Upper East Side.
This is a story about a fable-in-progress that comes to a grinding, life-changing stop.  Like most people, Jasmine sees herself as the author of her own story, in complete control of the next sentence, the next chapter, until, abruptly, violently – she isn’t.  And just like her, we all sweep the less tidy truths of life under our own narrative rug, with a “habit for looking the other way” – but in her case, the swirling storm of criminal deception and marital infidelity was so obvious, any ignorance of it must have been willful, and it finally spills back out and destroys her.  As she flails toward her new life in San Francisco and proceeds to go about the business of recreating something from nothing, she depends on new personal facts spun from whole cloth, sometimes on the spot, and trusts only the new lies she tells to provide the platform for mounting her new push to the penthouse.  She’s in top form as she tells her potential new lover, Dwight (Peter Sarsgaard), a couple of whoppers to avoid him knowing the truth, and he falls for the elegant widow she wants him to see.  Following this coup of deception, she provides what is perhaps the key line of the entire movie, “It’s all better… I met someone.  I’m a new person.” 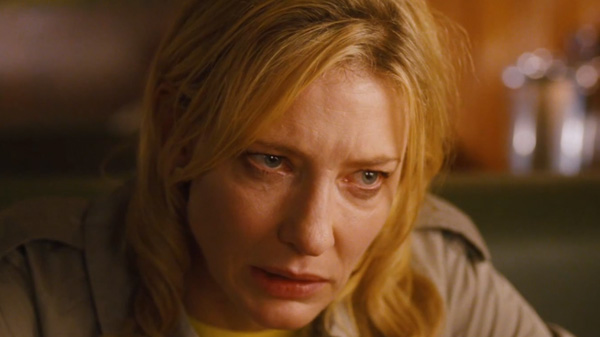 But it’s a testament to Allen’s attention to his entire canvas of characters that, while we’re wagging our finger at Jasmine, we get a fuller sense of Dwight’s shallow motives, too.  A man with an eye on a political future, it’s clear he’s willing to marry for less than love in order to present himself to the state of California as the perfect (married) candidate.  Later, when he happens upon the truth of her past, he seems less furious at the lie than at the fact that the lie means he has to fish for a new trophy wife. And Dwight’s not alone in his soft misogyny.  In fact, for the amount of criticism Allen might receive for creating a female character who completely crumbles at the mere loss of her man and his money, none of the men are blameless, either: Hal is a dead-eyed financial sociopath, Chili is prone to fits of property-damaging rage, Ginger’s ex-husband Augie (Andrew Dice Clay) is her ex-husband because he beat her, Dwight is a hollow status seeker, Ginger’s potential new-and-improved boyfriend Al (Louis CK) is hurtfully deceptive, and Jasmine’s son Danny (Alden Ehrenreich), perhaps rightfully so, heartlessly crushes Jasmine with a final face-to-face rejection.  Many of these faults are left hovering upstage, sometimes only back story, but they create an implicit world of cruelty and selfishness that at once forces Jasmine’s edge toward total meltdown and justifies the film’s final bleak note – one that, despite the shambling comedy that fills out the edges of Jasmine’s tragedy, fits in perfectly with Allen’s own perennial worldview.  Boiling evenly the primary elements of his latest slew of movies – the tragic morality tales of Match Point and Cassandra’s Dream, the broad and breezy characterizations of Scoop and Midnight in Paris, the “short story collection” vibe of Tall Dark Stranger and To Rome With Love, as well as a healthy dollop of 1990s, Judy Davis-brand hysteria in Husbands and Wives and Deconstructing Harry – Blue Jasmine is a familiar kind of fun for the fair-weather Woody Allen fan, but retains the familiar bite for his most foul-weather admirers.
Posted by Robert at 2:58 PM